In its second year, Afri-Cans Street Art Festival in Kampala, Uganda was a collaboration of artists who met to celebrate their passion for community-building through the design and creation of street art. 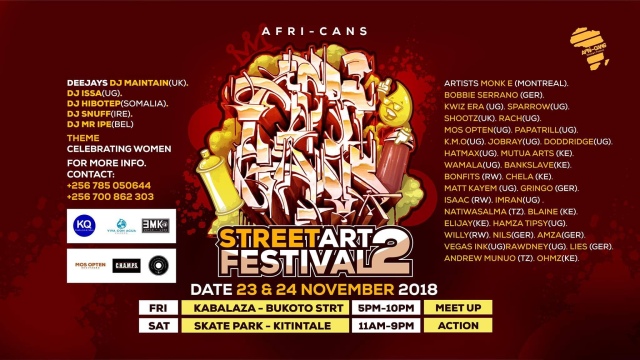 For one of the event’s founders, Sparrow Uganda, this day was the culmination of his longstanding vision to create a platform for artists to share knowledge and connect with each other. As he hoped, it also supports his mission to spread the development of street art throughout Africa.

On a weekend in November, 2018, artists from countries including Tanzania, Rwanda, Kenya, Canada, Italy, and Zambia joined their Ugandan counterparts to transform Kampala’s Kitintale neighborhood which surrounds the Uganda Skateboarding Union Park. 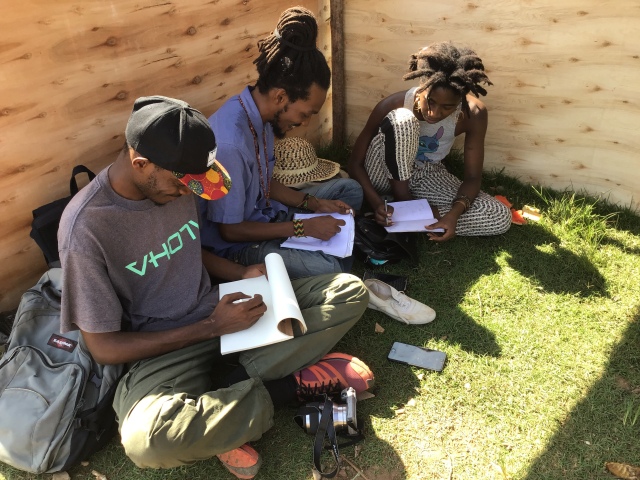 At a Friday night fest precursor, artists met at Kabalaza, which is a brightly painted rooftop innovation hub filled with a creative vibe. In fact, the whole open-air space is filled with graffiti art that serves as a small oasis from the busy city streets. As the event leaders, Sparrow and Mos welcomed the crowd, they talked about the importance of young Africans working together to empower themselves and each other….being stronger as a united front.

As each artist was introduced, their messages wove a common theme of pride in working with people they have admired from afar, finding kinship in common interests, and the power of art to change lives. Speech after speech brought cheers and applause of celebrating friends – many who had never met in person before. People offered inspiration to others and noted that art is a means to share stories of Africa without the bias of outside influences.

When I arrived at the Kitintale sight on Saturday morning, things were just getting started, slowly warming up, but with a buzz in the air. A few artists sat together sketching in notebooks, there was a swirl of a few early-rising skaters, the griddles warmed with smells of local food, the dj tested the mic, and groups of kids eagerly helped to set up the seating areas. 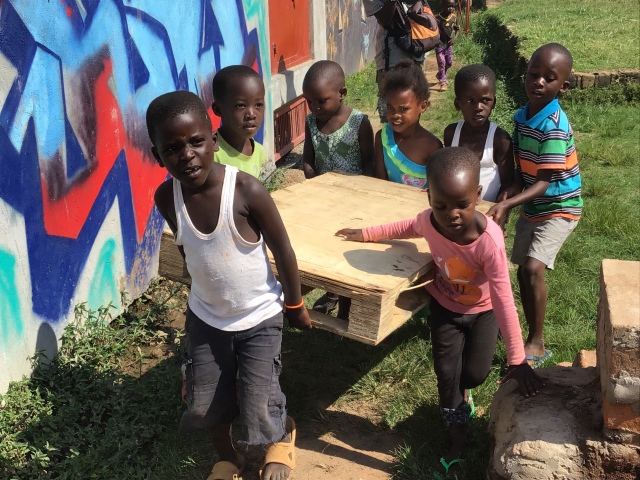 Kitintale is a bit remote, requiring a walk along dusty roads. As you enter the park area, street art from previous days starts to pop up along buildings to guide your way toward the central skateboarding ramps.

As murals began to populate the area, residents could feel the positive spirit that came along with the them. Now, given the chance, most of the community willingly donated the outside walls of their homes as blank canvases for one of the 40 artists attending the fest. The theme of festival art centered on the power of women. As the event founder, Sparrow, noted at the opening, “We all owe a lot to the women in our lives and this is our chance to honor them.” 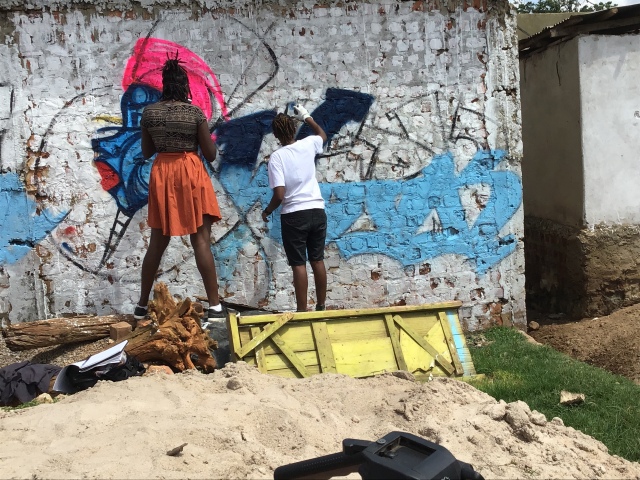 Throughout the day, artists were painting every available space. As a spectator, I watched their work unfold, graceful hands sliding over walls with seemingly magical touches. From their hands, beauty emerged in the form of diverse representations of the theme. Some had colors popping from their space. Others were bold and filled with vibrant messages. As every wall was covered at once, it was hard to know where to turn your head for fear of missing out. 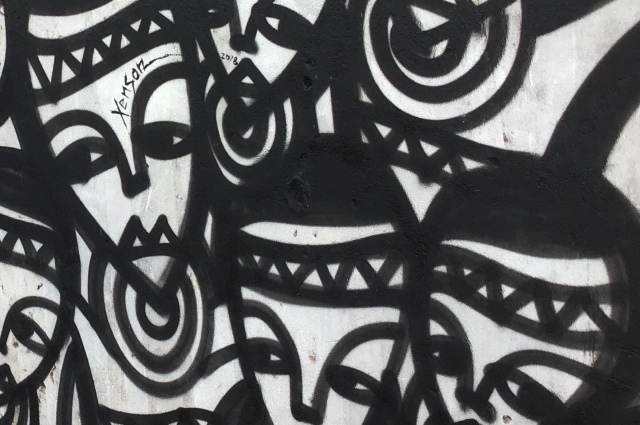 For this momentous event, I took a whirl at a mural (internal rhyme there – 8th graders)! After watching my friends create public masterpieces for the past weeks, I sketched a kindergarten style design of the word HOPE surrounded by a heart. Luckily, my artist friend Rach could recreate my drawing in an enlarged and improved form on the side of a house.

Our mission was to get kids involved in the painting process – and for a few minutes of awesomeness – our plan was working….until about 100 more showed up. Coming and coming…we had way more kids than wall space. We were lucky that Zebia, who I met the night before, showed up as a paint angel who lent her helpful hands all over the place…a real partner in our process. 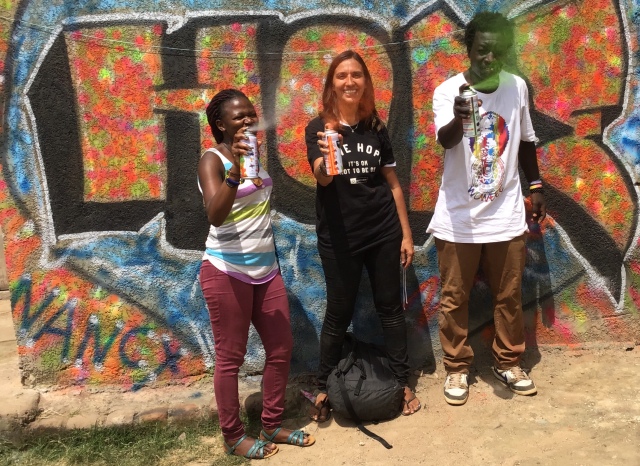 While I have been enjoying kids wherever I travel, I have yet to master the best way to organize large groups who are vying for access to a few available adults. It has happened in every spot. We start out with clear guidance and before you know it, kids are huddled into a large circle which makes any level of success a challenge. Once the cans came out, kids were getting pushed, paint cans walked away, and our line became a massive huddle. Although it was fun, general chaos ensued, so we trimmed our group size and continued to a finished product that made us all proud. 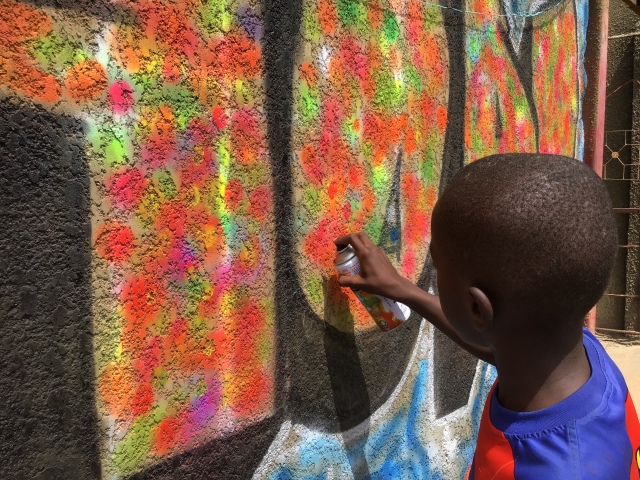 As I worked with Rach to find my inner artist, I was honored at his investment and enjoyed the thrill of seeing the creation of our partnership. 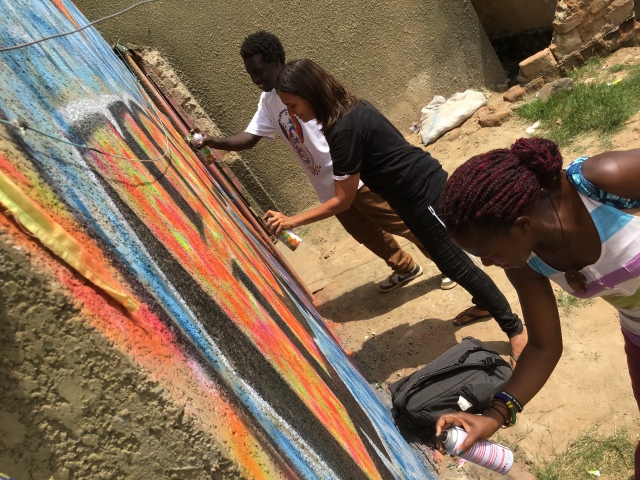 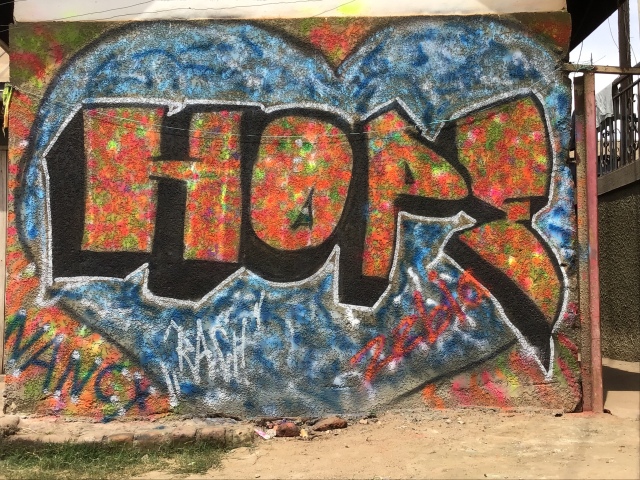 Every detail of this Afri-cans Festival was impressive. The art, the graphic design by Mos, the DJs, the visiting performers, the camaraderie. All of it! At each turn, blank walls became inspired messages of female empowerment. Clusters of motivated people engaged in conversations about visions for excellence and demonstrated their willingness to work together to create opportunities for themselves and others. Kids surrounded the skateboard ramps, cheering and watching a deeply engaged community beautifying their homes. 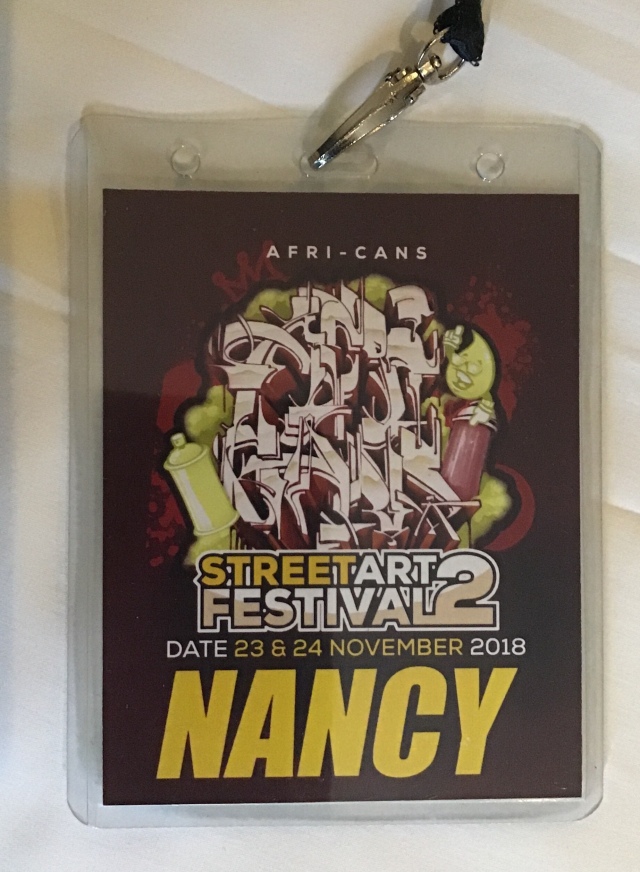 Young leaders can change the world, and Afri-cans was about more than the art – it was about the establishment of youthful and innovative leadership roles within Kampala. Having just recently met Sparrow and Mos, I was filled with honor as I watched them work in their leadership element. As a teacher, these are the kind of moments we talk about and dream of…the transition of power focused on good where we have a chance to learn and grow from the next generation of visionaries. They were a reminder of the shift of finding inspiration – not only from our mentors, but from those who are forging new paths.

I didn’t get many pictures of other murals…we might have gone a bit over the top at taking some of our own. Plus, after painting, we took a bit of time for origami. Be sure to search for #Africans2018 or #ASAF2018 on all social media to see pics…beyond impressive.

Plus, if you visit Kampala, Uganda, Kitintale is definitely THE place to go!

Working as a teacher has taught me about life. Working at the front desk of a hotel taught me a lot about people.
View all posts by bartoszblog →
This entry was posted in Africa, Africans2018, Kampala, Kitintale, Mental Health, Hope for the Day, Street Art, Travel, Uganda, USAF2018 and tagged Africa, Africans2018, ASAF2018, HFTD, Hope, Hope for the Day, Kampala, Kitintale, Mental Health, Skateaid, Skateboarding, Street Art, Uganda, Volunteer. Bookmark the permalink.