More Friends Than The Mountains

Iraq/Kurdistan was a whirlwind, at times, too much to process.

For weeks before arriving, I hiked and strolled through Middle Eastern streets enjoying friends, freedom, and falafel, while Jason worked around the clock to make connections for Hope Travels and developed “More Friends than the Mountains” outreach projects.

While he reached out to many organizations, there was one group who stood out for their welcome willingness to become partners – not just in name – but through generous shared resources including time, transportation, and oversight.

Barzani Charity Foundation oversees centers in IDP and refugees camps throughout Kurdistan/Iraq. Each of the centers is unique based on the camp needs and available resources, but all of the camps are filled with dedicated people who bring hope through hardship.

While I know this blog post is long, it is only a sliver of the goodwill shared and challenges addressed by the Barzani team during our time together.

Our first camp visit was to Hassan Sham IDP camp. Internally Displaced Persons are people who remain in their countries but were forced to leave their homes because of the effects of armed conflict, generalized violence, violations of human rights, or natural/human disasters.

As we turned onto the road leading in Hassan Sham for the first time, both sides of the street were filled with abandoned buildings obviously hit by air strikes. The structures appeared to be destroyed with specific precision from clear explosions centered on rooftops. We learned that these buildings were previously occupied by members of ISIS and the entire community was destroyed by US air strikes in the fight to remove them. It made sense – but felt ominous and unsettling at the same time.

After entering the general camp area and meeting the camp leaders, we walked to Hassan Sham’s Barzani Center which illustrated a literal form of a “safe space.” Through the fence, music blared as a cluster of girls danced in an experienced sync, a classic recess parachute rose and fell in the eager hands of smiling kids, and determined feet kicked a soccer ball across through a small field. All of the destruction we passed seem far away, which now I recognize as one of Barzani’s key goals. As we heard again and again, we can’t give answers for every single problem, but we can help kids to experience happiness – and that means something. 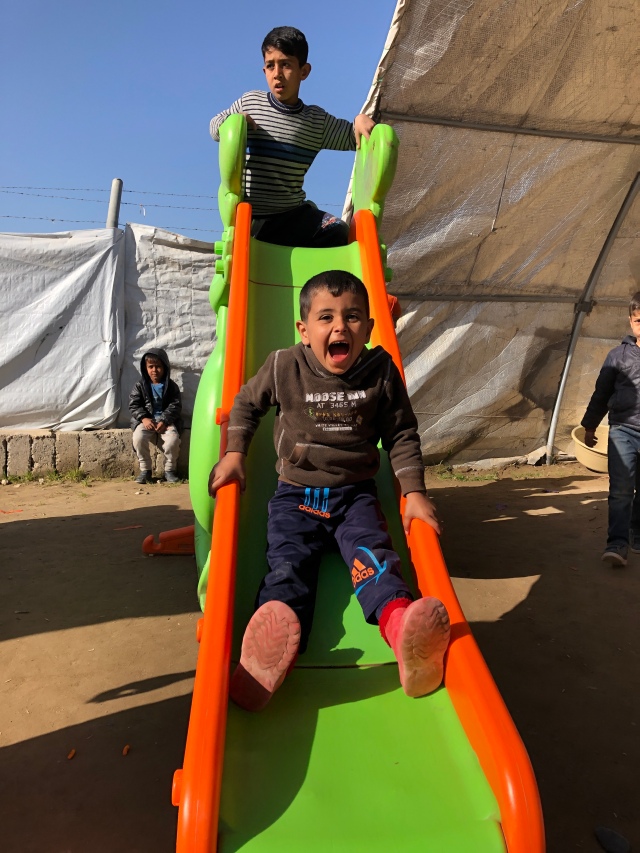 For our first hour, we dove in…not knowing where to begin. I imagine this is how the kids feel each day as they decide where to start. Of course, the parachute and dancing feet pulled me in…with a few side trips down the slide. While this could have felt like a playground anywhere in the world, there were moments of clarity that proved this wasn’t true. Within these fences are a mix of children orphaned by parents who were members of ISIS who gently play alongside other children who lost their parents during ISIS attacks.

This was our first experience sharing the kites gifted by friends from home…and it was a bit crazy. Kids were everywhere, all seeming to finish coloring at the exact same moment. An intense glee filled with air as we struggled to get kites together in time for play. In the end, kites filled the field, along with kids who were smiling, laughing, and running while wearing ninja headbands made from kite ribbon. Creative chaos at its best.

The Barzani team at Hassan Sham is exceptional. Every person we met was dedicated to growth and willingly worked beyond reason to make a difference. Working in intense environments like Barzani Camps is a 24/7 job and not something you walk away from at the end of the day. Through tired eyes and limited resources, they persevered in connecting with every child we encountered. 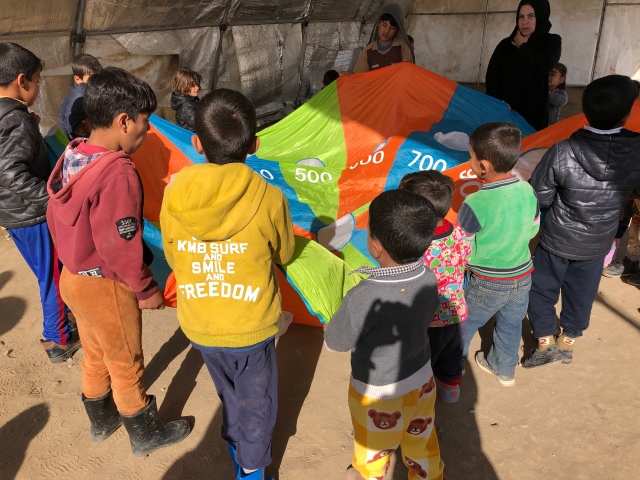 Our second camp experience was much different. Domiz Camps 1 and 2 are home for Syrian Refugees. Unlike the tent homes of Hassan Sham, the streets were lined with more permanent structures including a typical main street lined with small shops selling essential community goods. There was sense of progress here and hope as kids shared dances and were equally eager to fly kites. For camp two – we quickly trained the Barzani team and were getting in the groove of putting the kites together.

We are learning a lot about how to be more responsible humanitarians when it comes to interacting with kids, but we also have much to learn. Developing relationships is important, but it’s also hard for kids to have people in and out of their lives. It’s something that I have consistently pondered on this trip – wondering about the best ways to interact with children in respectful and helpful ways.

The third camp we visited was outside of Duhok. Dawidiya IDP Camp is primarily a home for Yazidi families. The plight of Yazidis at the hands of ISIS may be familiar from news reports describing them being held in mountains where they were persecuted and starved with great cruelty as they awaited support from the international community. This camp was hard. The location is further from primary cities so there we fewer resources and support from international organizations allocated to people who have already suffered intense atrocities. The camp lacked play structures found in other spaces we visited. Classrooms in the camp school were filled with kids who were ready to decorate kites. It was apparent that life experiences had made the children more cautious…you could feel weight on their young shoulders and even fear and reluctance in some eyes.

After kite-building, during a walk through the camp, we encountered many of the children again. Soon, we had a big group of playing and dancing kids. The boys followed Jason as he randomly sprinted down the dusty street with a dramatic appeal. They laughed while attempting to catch his whirling feet that psyched them out in all directions. A group of girls looked at the boys, then looked at me, and did an international eye roll, noting the silliness without saying a word. Instead, our girls club easily enjoyed chatting and skipping down the same streets. It was so much fun, as it is whenever you get a few minutes with kids, but as we walked away, I carried the weight of a person who can so freely walk out these doors while others were left behind. 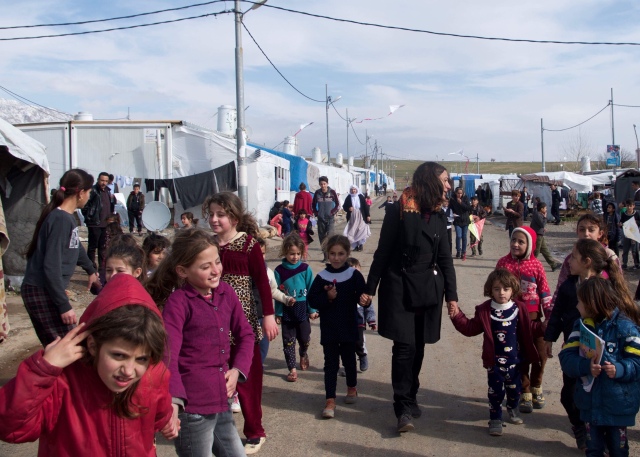 While in Kurdistan/Iraq, we also collaborated on the planning of two community events with local nonprofit organizations. The map of Erbil is a circle with the Citadel, a UNESCO World Heritage site, smack dab in the center. Truly, all roads lead to the Citadel. On a perfectly sunny Saturday, with just a touch of a breeze, Barzani Charity Foundation invited families to enjoy an afternoon of kite flying. The children received kites filled with designs from the US. We watched as proud parents smiled and laughed at the antics, running along with kites and cheering in awe as the traveled aloft. Colorful kites above his historical site shouted majestic messages of friendship and hope.

With a colorfully diverse HOPE mural proudly hanging in the background of Citadel stage, Jason and Mo offered words of friendship to connect our countries and share hope. News cameras filled the area with microphoned reporters asking questions about the project and highlighting the deep friendship of US citizens and Iraqi Kurds. This moment was the culmination of hours of investment by many: the mural designers, US artists, Melissa Marie Collins and Mike Steneron and Kurdish artists, Awa F. Bakr and Vanila Van; people who purchased or colored kites; and Jason, Aamr, and Mohammed who communicated for months to create this powerful moment. 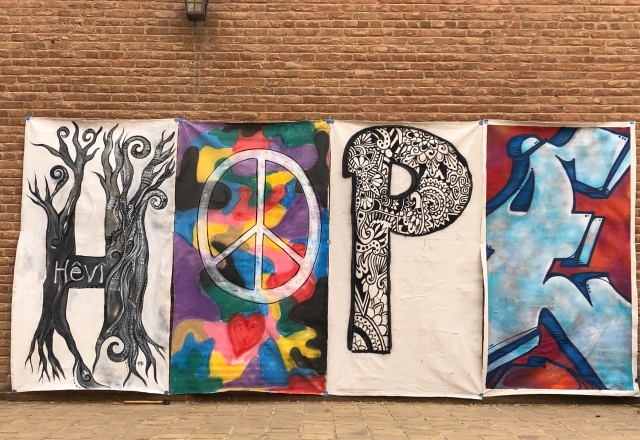 The second event was planned in partnership with Halabja Glory Foundation who are instrumental in planning humanitarian efforts in this city. Halabja is another community that struggled to receive international support from NGOs because of the longer distance from main cities. However, recent history of this town certainly warrants a deep international response. On March 16, 1988, Halabja was the site of a chemical genocidal massacre where mustard gas and unidentified nerve agents were used to kill up to 5,000 and injure 10,000 Halajans, mostly civilians. The atrocities committed by the Iraqi Regime under Saddam Hussein have left both physical and emotional scars on Kurds that continue to create issues throughout the area including the increased incidence of cancer and birth defects that occur today.

The Halabja Glory team tirelessly dedicates itself to bringing awareness to the plight of chemical massacre survivors while fighting for the reconstruction of hearts and minds. During our time in Halabja, their team extended themselves to meet our every need. Their event planning was precise and they used kites as a tool for sharing hope at the feet of the Halabja Memorial. Children sang with enthusiasm, teachers watched students with firm, but loving eyes, and kites flew.

Fun was had – but the Halabja Memorial was also a place for intense sadness. Looking at statue recreations of March 16, 1988 illustrated the types of everyday activities taking place during this attack. Parents unsuccessfully attempted to cover their children while taking the brunt of the painful attack. Burns, disfigurement, and excruciating death are the realities of chemical warfare. Each child pictured within the memorial resembled children I know, and even that tiny bit was overwhelmingly painful to consider. Halabja left an imprint for the resilience to move forward, but also for the great needs that exist there today.

Emotionally – time in Kurdistan moved between these intense moments of despair mixed with gratitude for our Kurdish friends and the culture that is by far the most generous I have experienced. Characteristics of strength, resilience, and unselfishness are the norm rather than the exception.

At the same time, we experienced the same youthful spirit that questions status quo and fights for change. Snapchat and selfies fill the air and conversations question the establishment and push for change. There is a vibrancy about this area where we will surely return. 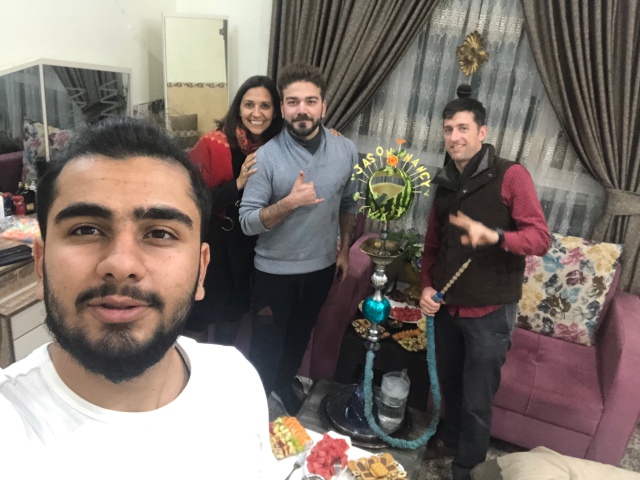 3 Responses to More Friends Than The Mountains