Getting to Know Mauritania

I arrived in Namibia yesterday, feeling anxious to spend the next few days writing about my time in Mauritania. 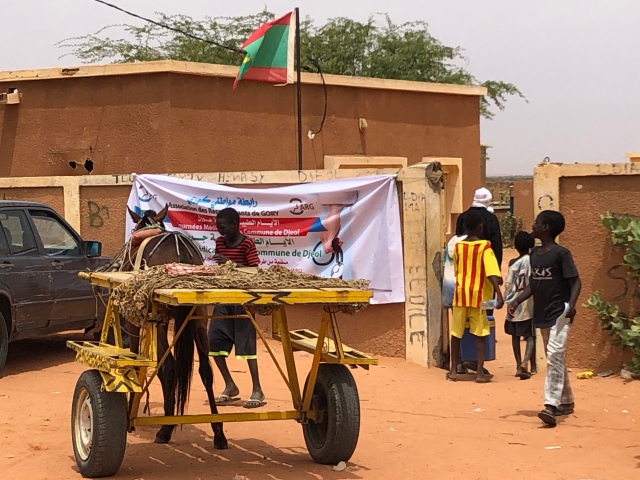 Each morning, noon, and night during my visit was filled with activity. So much that it was hard to effectively process what was happening in this unfamiliar country. Before leaving for this trip, I met with a friend named Sean Tenner to discuss potential connections in Africa. He talked about Mauritania and his important human rights work with Bakary Tandia. To be honest, as he shared, I wasn’t sure I had heard of Mauritania and could definitely not find it on a map.

Months later, Mauritania wasn’t on my itinerary until my friend Kim told me she would be visiting in March. Although it was a big detour, I decided backtrack to West Africa to spend time together, and I am so happy that I did. Not only was it wonderful to reconnect with this deeply inspiring woman, but Mauritania proved to be one of the most interesting places I have ever visited.

During the past weeks, I met so many kind and generous people. It challenged my senses and travel abilities in good ways. The sights and sounds lit my heart and soul at almost every turn. Before I detail specific projects there, I want to share a few general items about the people and things that make this such a special place.

There is great vibrancy in Mauritania that can truly overwhelm the senses. The desert landscape is filled with soft sand and seashells. Brightly painted walls often fade and peel from the high salt content that leeches upward from the sand. Walking through crowded streets require a constant “head on a swivel” to avoid donkeys carrying large carts of goods or people selling every basic human needs – especially deliciously simple culinary treasures. 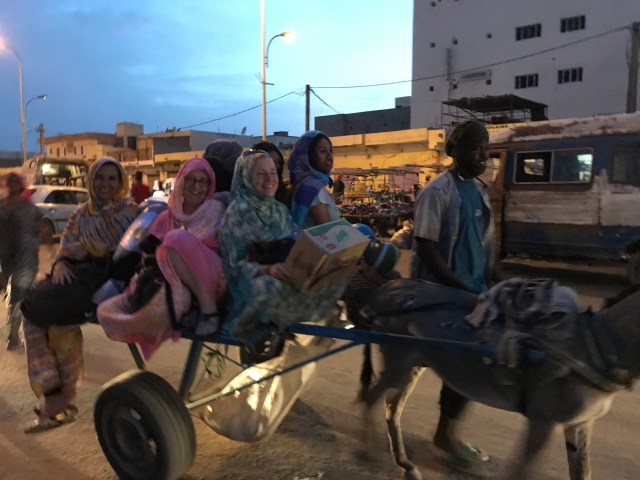 Mauritania is an Islamic Republic with varying cultural groups. In a short time, I sought to learn about the cultural norms and differences between each group, but there is much more to know that I currently do.

Walking through the streets, many women are covered in beautiful clothing called melafas. As far as the eye can see, one melafa is more beautiful than the next – a seven foot scroll of lightweight fabric that requires special ties and wraps to effectively cover all parts without trailing behind. More often than not, I needed help to get mine just right, and was like a young child who needed help tying my shoes as I helplessly sat by and let others do the wrapping. 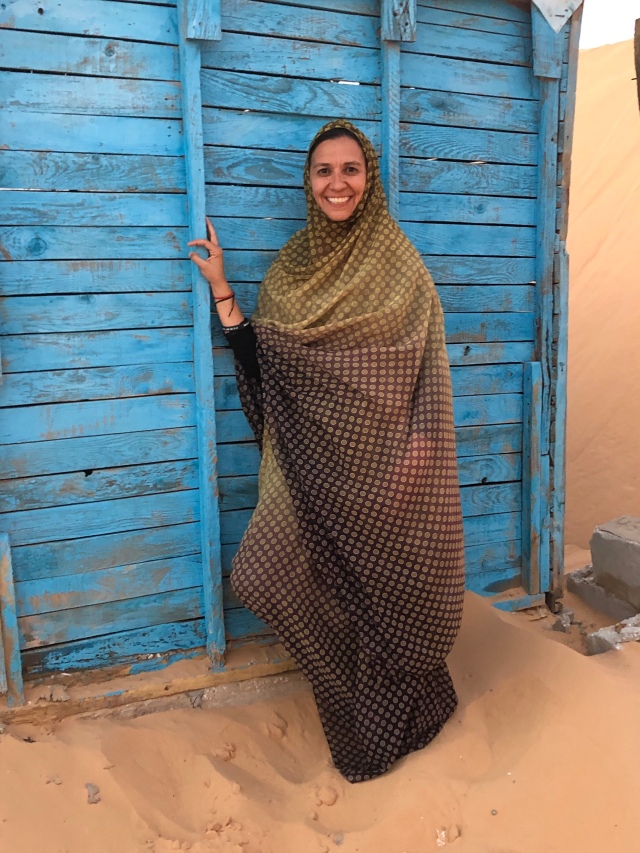 Most things in Mauritania are enjoyed communally. When visiting the home of another, you are quickly offered Mauritanian tea which is unlike any I have had before. Mauritanians work diligently to froth their tea with a cup to cup method of tall pouring. In the end, the small glasses are half-filled with froth covering a small amount of minty, sugar-filled tea. It’s taken in one quick sip – and three cups are typically offered consecutively. In Mauritania, people have strong throats that quickly down the steaming hot drink. My slow paced style of blowing on each tiny sip offered some amusement.

Frothing the tea is much harder than it looks. I tried and failed – spilling more than I saved for drinking.

Eating is a shared experience with all hands dipping into the same platter for delicious rice dishes filled with vegetables mixed with meat or fish. As I ate from the platter, I often noticed others pulling apart the best parts of the fish and moving it my way – sharing the best of what was offered in this beautifully concrete way. Eating with the right hand is common practice with a small bowl offered for hand washing before and after the meal. Being a “lefty” made this something that required thought – and a few easily forgiven missteps along the way. It’s common to end the meal by licking the hand of all food remnants so as not to waste what was provided. I enjoyed every delicious meal I ate – not only for the bursting flavors – but more importantly for the friendships created by this type of intimate sharing of daily meals. 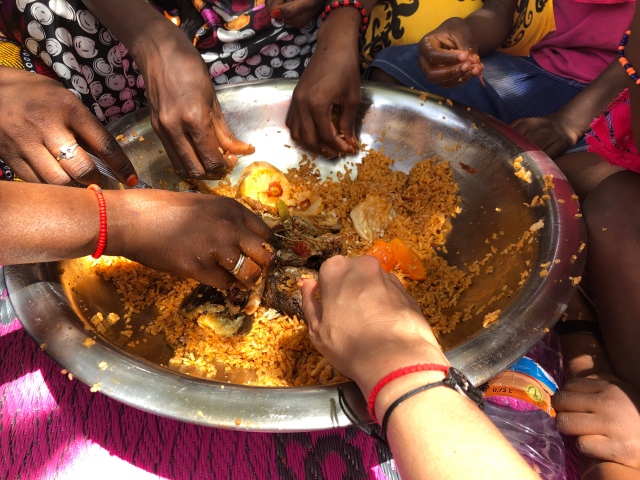 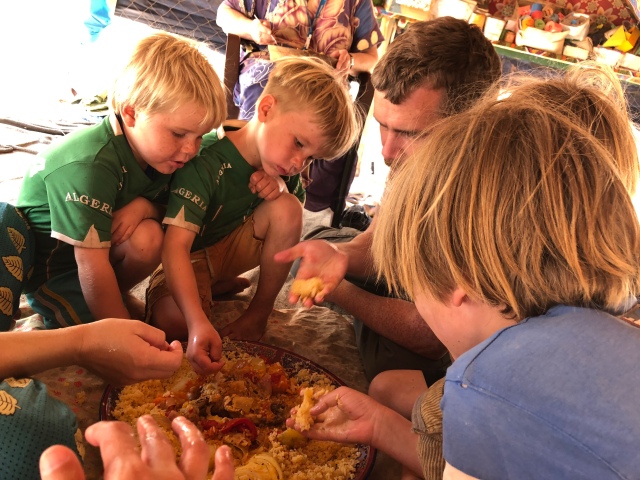 Walking through crowded markets and sandy streets offered many snack options. Food served on the roadside is always a favorite for me. Our morning routine always included fresh loaves of hot break and hard boiled eggs. Bags of mandarin oranges were also a staple for snacks and desserts. 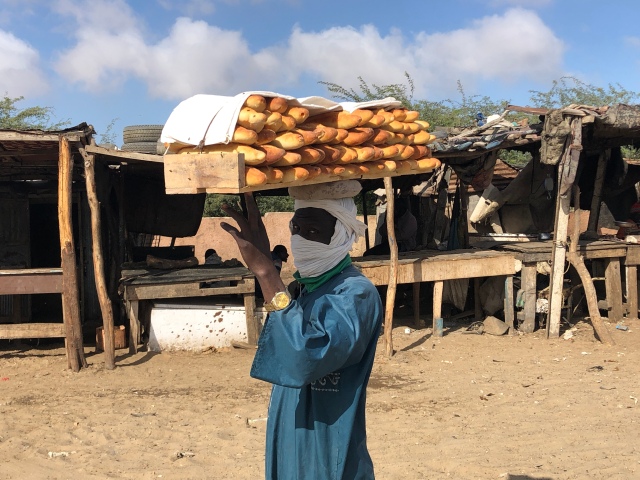 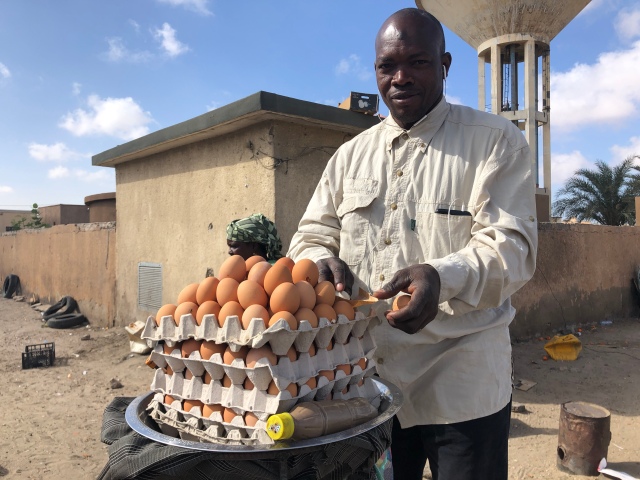 I am typically not a meat eater, but while traveling, I aim to eat what is offered and recognize that my ability to not eat certain items is a privilege I have lived with for years. Meat here is fresh – so fresh that a central meat market in town is actually a field filled with goats and cows. Non-refrigerated meat is always something that takes some getting used to as it is sold at small kiosks hanging from hooks and sitting on wooden counters. I tried a bit of camel meat and goat when I was here and can’t really judge how it compares to other meat as it has been so long since I have eaten it…but I think it was pretty good. 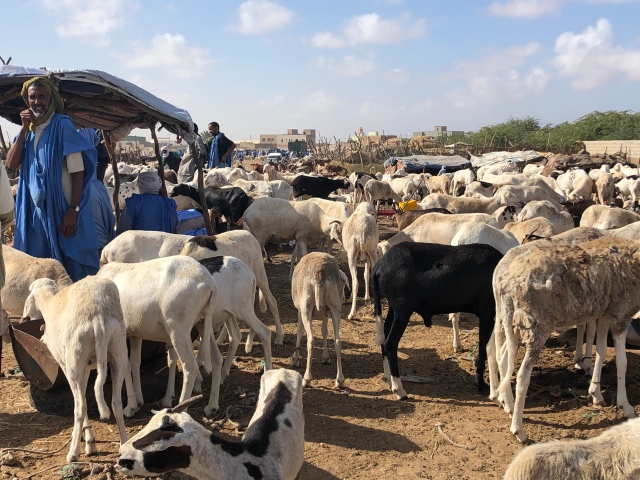 Mauritanians have very open homes that welcome guests all the time. It is not uncommon for people to drop over late into the night to share time together. While traveling to a small village where a companion’s “mama” stayed, we didn’t hesitate to make a quick visit that woke everyone up to say hello at 1:00 AM. I enjoyed the tent-like living rooms in many homes where guests were welcomed. While passing one family, they quickly invited me into their space to enjoy some tea and nuts together. Welcoming friends and strangers is a regular practice here with food always seeming to be ready to share.

Family is important here with all members of the family considered as mamas, brothers, and sisters. Children are overseen by all members of a community and are encouraged to be respectful by shaking hands and greeting adults they meet. Although there were language challenges when communicating with children, common smiles were always a way to share nice moments together.

Taxis are a main form of communication in the main city of Nouakchott with old cars driving along main roads carrying as many passengers as possible down straight routes. Getting a taxi on busy roads made me very happy to my friend Leena could navigate all destinations.

Women and men are generally separated in the car, seating all together in the front of back seat. Three people in the front was typical, but the back seated held as many people as the driver could fit – generally four adults. There were a few occasions where we had to push ourselves tighter and tighter to close the door. During these times, I decided it was best to be the last one in the car because you squished on top of the pile. During one ride in a small hatchback, our car held seven squeezed adults with a noisy sheep baa-night in the back.

Mauritanian people are not particularly outgoing at first, but generous and kind. I tend to be a bit touchy when first greeting people – so I often had to navigate how much was too much. Over the course of my time there, I met many exceptionally generous people who shared much of themselves in different ways.

During my 16 days in Mauritania, I…

*Worked with a local artist named Leena on painting projects to support the work of Foundation Noura at both the boys’ and women’s prisons. Leena’s and her husband Mikka are from Finland and moved to Mauritania ten years ago. They have fully invested themselves and their four sons in being Mauritanians. I learned so much from them during time in their home.

*Traveled seven hours from the city to a village named Gory with over 45 doctors who spent the weekend giving free medical care to over 2,000 people.

*Met with a teacher of an adult leadership class to learn about his programs and offer some general ideas for group activities and learning plans.

*Shared kites with children and teenagers in three places including a group who attended weekly Korean language classes offered at the Korean Cultural Center.

*Enjoyed making origami in many places along the way.

*Enjoyed a sunset meal on the sand dunes with many others who enjoy this Sunday evening time with family and friends. 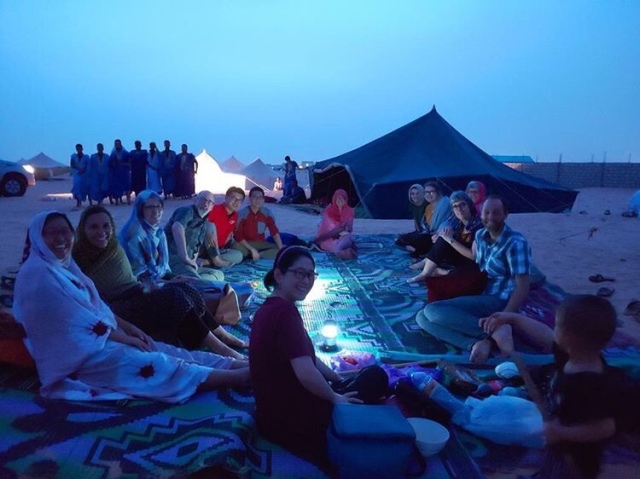 As I sit enjoying the quiet of my Namibian hotel, I miss the pace of Mauritania. Iam fondly thinking of my desire to return someday soon. For now, my pictures and memories will have to suffice. I hope you will enjoy my upcoming pictures and posts about this wonderful place.